Error: An access token is required to request this resource.
Type: OAuthException 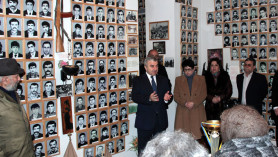 Democratic Party of Artsakh has programmed its first meeting in the NKR museum of the perished soldiers’ families within the frame of the electioneering. The party leader Ashot Ghoulyan together with the deputy of the proportional electoral system, Jhanna Galstyan, member of the DPA Central Council, Donara Gabrielyan and the majoritarian system deputy, David Melkumyan, visited to have free and friendly talks with and feel the mood of the voters. In his pre-election speech A. Ghoulyan noted that the choice of the museum as the start was not an accidental one because the blessing of the relatives of the perished who gave their lives for the freedom of the country. The party leader also mentioned that a lot of events have taken place in the country since declaration of independence including Presidential, Parliamentary and local elections. On May 3, the 6th forthcoming parliamentary elections will be a step forward in terms of strengthening of the democratic values and will be a test for all the political forces. In order to materialize the expectations of the voters first of all people in the National Assembly should be ideologically mature, educated with the legislative work experience, who put the public interest above their personal ones and who will faithfully serve the people and the Motherland.

Addressing the participants and emphasizing their role in upbringing their hero children in the support of the state building Ashot Ghoulyan assured them that the Democratic Party of Artsakh will tend not to disappoint them and inspire confidence in the future.

Head of the NKR NA, chairman the DPA Central Council Ashot Ghoulyan together with his party members also attended the “Union of War and Labour Veterans” and “Union of the relatives of the missing soldiers-liberators of the NKR war”