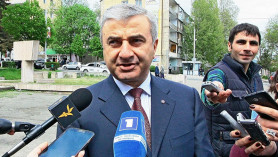 May 3, Artsakh citizens using their constitutional right for the 6th time participated in the NKR Parliamentary elections. 42 candidates, registered through majoritarian system, and164 candidates registered through proportional system fought for 33 places in the Parliament. There were 279 acting district election commissions. 100 international and more than 140 local observers followed the elections. The elections were covered by about 40 representatives from abroad and Armenia.

As it was stressed by the Chairman of the National Assembly, the leader of the Democratic Party of Artsakh, Ashot Ghoulyan at the briefing, the successful outcome of the parliamentary elections will facilitate more active conduct of the democratic process in the country, strengthening the relations between legislative bodies of different countries and recognition of the fact of self-determination of Artsakh.

Touching upon the forthcoming changes in the Parliament and correlations of the political forces in it, Ashot Ghoulyan noted: «Apparently some changes will take place, but in my opinion, the basic alignment of forces will remain”.

Referring to the electoral process, he stressed: “Compared to the previous elections current elections are more competitive. In the course of election campaign political activity was indicated in the political arena. Election competition showed the possibilities of all the political forces and from this point of view there was no restriction. It could be assumed that the political arena will be more widely presented in the Parliament of the 6th convocation”.

As for the appeals of the representatives of some parties exclusively for their political forces, Ashot Ghoulyan said: «In my opinion, civilized competition rules were generally respected during the election campaign. However, there were adverse effects that are unacceptable for ADP. I offered the parties to sign a memorandum on the conduct of free and fair elections before the start of the election campaign.  But there was no reaction. I think one could be fair and principled and comply with the rules of civilized struggle”.

According to preliminary data of the CEC, the voter turnout in the vote in the elections in the NKR National Assembly was 70.6% (72.039 people) which means that the Parliamentary elections were held in Artsakh.