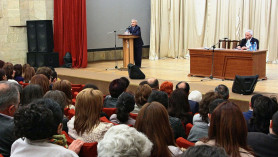 April 10, the leader of the Democratic Party of Artsakh Ashot Ghoulyan had a meeting with the representatives of the NKR State Tax Committee, Ministry of Agriculture, Artsakh Investment fund, and Countryside and agriculture assistance fund, Union of Entrepreneurs, small and medium business, bank system employees.

Referring to some points of the election program, establishment of democracy and legality in terms of liberalization of the state management system, Ashot Ghoulyan underlined the need to continue reforms in the country.

The party leader thinks that at the forthcoming parliamentary elections on May, 3 the voters will make the right choice and give their voices for the candidates who are ready to be fully devoted to their jobs and serve the people and protect their rights.

During the meeting the candidate also touched upon the problems of the general public. Recent tax reforms, the need to make some legislative changes, which he considers will ease the tax burden of those dealing with small and medium business.

Ashot Ghoulyan underlined that the Party gives importance to the development of the agriculture and considers that the farmers’ problems should always be the focus of the State and political parties. And favorable conditions should be created for the young families.

Summing up, the Party leader urged the participants to be actively involved in the parliamentary elections. At the end the Party leader added half-seriously that “it was time to sow political seeds and you should not be mistaken in the selection of seeds”