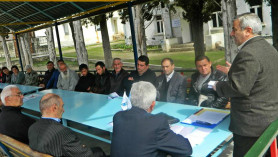 The Democratic Party of Artsakh(DPA) nominated candidates to the parliament according to the proportional list of the Party headed by the Chairman of the National Assembly and the Leader of the DPA Ashot Ghoulyan had meetings in Martakert, Hadrout, Martouni, Shahumyah and Shoushi regions of NKR within the framework of mobile election campaign.

About 10-12 meetings were organized with the public representatives during the day. The electorate showed big interest towards the upcoming elections which was noticeable during the questions and answers. The candidates tried to present the political and socio-economic situation in the republic as well as all the steps taken in the strengthening of the state borders and providing safety, peaceful resolution of the Karabakh conflict and strengthening of the democratic values.

The people of the villages raised different questions according to their local climatic features and economic situation and the importance of enhancement of the role of the future Parliament and the political resolution of the Karabakh conflict. Also people were worried about the problem of the youth employment.
“All our meetings are aimed at the achievement of one goal – to be able to solve the problems which occurred in many years,- said Ashot Ghoulyan during the meeting in Martakert. – We are well aware of both social and economic capabilities of our country. We also realize that the problems could not be solved in a year or two. At the same time the authorities have to undertake steps that will allow achieving certain annual changes and progressing in the communities noticeable for the people”

Touching upon both the presidential, parliamentary and local elections in the republic last two decades, Ashot Ghoulyan stressed that according to the foreign observers our elections can serve a “brilliant model for many neighbor countries”

Regarding the parliamentary elections of the 6th convocation A. Ghoulyan noted the specific feature of the new parliament is that it is going to act on a permanent basis.

“The delegates elected by you nominated by the proportional list of the party have to be aware of the details of the legislation, know the legislative peculiarities of different countries, create more profitable laws for the people”, resumed the DPA leader appealing to all those present to elect those candidates whom they trust.

During the meeting in the villages of Karin-Tak, Mets-Shen, Ekhtsahogh, Lissagor of Shoushi region as well as in the city Shoushi A. Ghoulyan noted that the party is not going to distract the attention from the principles of justice, legitimacy and democracy chosen in 2010. “The Parliament has to work in a team with the people. However deep the knowledge of the parliamentarian is he will not be able to solve vital problems without a support of the partners. So there is a need in political support in any legislative initiative”, noted the chairman of the National Assembly. Touching on some points of the pre-electoral program of the party Ashot Ghoulyan noted that it was the result of a team-work and he was sure that it would meet the approval of the voters.

At the meeting which took place at the regional center of Hadrout as well as in the villages of Azokh, Mets Tagher, Togh, Toumi, Mokhrenes where the DPA leader Ashot Ghoulyan, Parliamentarians Jhanna Galstyan, Vardges Bagiryan, Lyudmila Barsedyan, Arevik Petrossyan, deputy minister of Health Zoya Lazaryan, a candidate member of the parliament Armo Tsatryan a number of problems and the perspectives of the development as well as strategic programs carried out by the authorities in many spheres were touched upon.

The war has not finished yet and our attention is constantly concentrated on the borderline of our country where our soldiers are carrying out their service unshakable in their holy mission, noted Ashot Ghoulyan. Our enemy is so un impudent that makes new attempts thus endangering the lives of the 18-20 year-old soldiers”.

The Government and Ministry of Defense do everything possible to raise military preparedness of our army and protection of Artsakh. Unfortunately as a result of the acts of sabotage of the enemy we have irreversible losses. Azeri authorities don’t conceal their plans to solve the conflict by force.

Co-chairmen of the OSCE Minsk group and different competent international organizations repeatedly underlined that the conflict could only be solved peacefully. According to A. Ghoulyan the enemy aims to do everything to besmirch the forthcoming 100th anniversary of the Armenian genocide and the Parliamentary elections in NKR on May 3. That is exactly why we have to be more alert, united and fortify our defense borderline.

During the meeting with the voters in the villages of Charektar, Dadivank, Nor Erkedge, Eghegnut, Nor Karachinar, Nor Kharkhaput, Knaravan the main point was about the importance of extension of the power of institutions of local governing and making changes in the system of state governing.

Addressing the increase of effectiveness of the village communities work, Ashot Ghoulyan pointed at the importance of assignment of a special status to the villages at 3 -5 km away from the frontline.

The DPA declared the importance of the review of the agricultural policy, establishment of a strict control on over the work of the farmers-debtors and consumption of the government earmarked funds. Ashot Ghoulyan also added that the cattle-farmers and crop-growers must by all means feel the state care especially during the realization of their products.